The Skinny On THCv 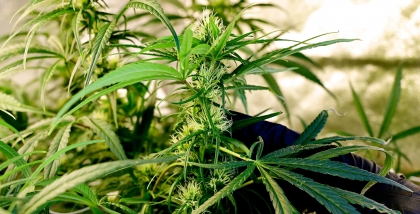 The cannabis industry is buzzing about THCv (Tetrahydrocannabinolvarin), but the renewed interest does not reflect how long we’ve known about this rare cannabinoid varin. With the potential to provide consumers with a number of solutions to many issues, THCv is at the forefront of exploding into mainstream popularity.

There are over 150 cannabinoids currently identified in the Cannabis plant, and within that group, there is a sub-family of varins. On the molecular level, varins have slightly shorter carbon tails than the five-carbon tail commonly found in the more well-known cannabinoids like THC and CBD. Researchers are currently working to determine how this structural difference relates to the unique chemical effects on the body when the product is inhaled, ingested, or applied topically.

Initial research has demonstrated a number of potential benefits of THCv, from battling neurological diseases like Parkinson’s, Alzheimer’s, and epilepsy, to potential antimicrobial and anti-inflammatory properties that makes it a candidate for anti-cancer research. THCv even appears to influence the metabolic system, resulting in appetite suppression and improved insulin regulation. This metabolic influence has also inspired studies focused on THCv and other varins for bone health and cell regeneration.

From a consumer perspective, people often report that THCv suppresses their appetite and provides a boost of energy and focus. Much of the discussion around THCv focuses on these two benefits – people who want to stay clear-headed and enjoy cannabis products during physical activity and social events are drawn to the energetic effects of THCv. For some people, THCv could even be a substitute for highly caffeinated drink, giving energy without the jittery crash. There is also limited research that suggests THCv, in small doses, limits the psychoactive effects of THC and reduces stress, making it a potential option for people looking for a less intense consumption experience.

THCv in the cannabis market

Demand for THCv is growing for consumers with access to legal cannabis, but due to the challenges with growing high-THCv plants, it has yet to produce a significant supply. Strains that are traditionally known for having higher amounts of THCv, including African landraces like Durban Poison, still only produce small amounts of THCv, making it difficult to effectively bring the minor cannabinoid to market. These challenges with the supply of THCv are why we launched a new, THCv dominant strain called Dayslayer™.

This exciting new strain has over 20% cannabinoids, 2% terpenes, and, at 9.5% THCv, it has more than double the level of THCv compared to other strains. Dayslayer™ is a vigorous plant with a dense growth habit. It clones easily and quickly and yields higher volumes of its unique-looking flower than other high THCv plants. These factors solve a lot of the cultivation challenges of other THCv strains and allow THCv to enter the consumer market in a more accessible way.

Simply rubbing the leaves of the Dayslayer™ plant releases an enticing scent due to its unique terpene profile. Myrcene, caryophyllene, ocimene, and limonene give Dayslayer flowers the fruity, herbal aromas that hold through dry and cure. Since Dayslayer debuted on the market in California, it has become a favorite among local consumers. “It has a smooth, spicy-sweet smoke that creates a functional high. The THCv allows me to stay focused throughout the day, and I love that it’s the opposite of most cannabis flower and keeps the munchies at bay,” said Tricia Goldberg.

THCV and Other Varin Cannabinoids: What the Scientific Research and Anecdotal...