What is Hop Latent Viroid?

Hop Latent Viroid, a disease most commonly referred to as HLVd (also HLV or HpLVd), hit the cannabis industry head on in the last couple of years and led to significant losses across cannabis grows. HLVd symptoms are not immediately obvious, and infected plants can often remain undetected for weeks. Due to the viroid’s delayed signs of infection and propensity for rapid transmission, the threat continues to grow and does not appear to be going away anytime soon. Therefore, it is extremely important to properly identify diseased plants and take all precautions to prevent further spread.

What is Hop Latent Viroid?

Hop Latent Viroid is simply a small RNA, roughly 250 nucleotides in length. While viruses typically consist of nucleic acids and coat proteins, viroids consist only of RNA and no coat protein at all. Interestingly, viroids are considered the smallest agents of infectious disease and have only been found in plants.  They are completely reliant on a host for survival and have been shown to highjack endogenous transcriptional machinery to replicate. Some scientists think it acts much like a micro-RNA, an RNA molecule with sequence specific gene knockdown capabilities. We generally know how viroids work in other plants, but the molecular mechanisms by which HLVd confers the symptoms in cannabis remains undetermined.

Hop Latent Viroid can be disastrous if it is not discovered early enough to quarantine the diseased plant and prevent it from spreading to others. Plants infected with HLVd often show a number of symptoms, usually easier to identify in the flowering phase of the plant, including:

Hop Latent Viroid is difficult to diagnose visually because diseased plants can pass as plants under stress. Only regular testing for HLVd using molecular assays will determine which plants are infected and need to be removed from the greenhouse and/or quarantined for further observation.

In a perfect world, you’d sample for HLVd from all parts of the plant to ensure you’re covering all parts of the canopy. Unfortunately, that’s not always an option, so we recommend sampling towards the bottom of the plant, close to the main stem, leaf and petiole. We suggest this for a few reasons: our internal testing data suggests HLVd presence is easier to detect in the older growth regions of the plant. Also, sampling from this region is less invasive to the growth and development of the plant, a leaf or two from the lower canopy should not impart too much stress depending on the growth phase. Sampling clones with 4-5 nodes of growth is possible and recommended with additional follow up testing at least 30 days later.

You’ll also need to determine the frequency of testing for HLVd. This is often dependent on resources, and we forecast how many tests will be needed on a location and functional basis. We sample every individual plant monthly in our Clean Stock room to ensure we are maintaining a healthy stock of plants to replenish our production lines. In other parts of the greenhouse, we batch samples at different frequencies and use different methods because testing at volume can become cost prohibitive. Make a budget, stick to it. 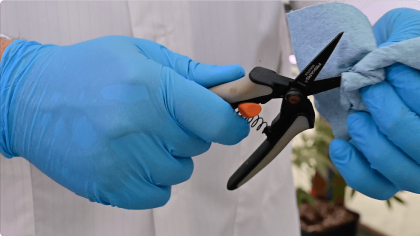 Hop Latent Viroid is transmitted mechanically and completely reliant on a host vehicle to transfer from plant to plant. Vectors for the disease are usually mechanical and facilitated by people, but plants can become infected when exposed to certain environmental conditions, potentially including insects such as aphids or thrips, although documentation of this is sparse in the cannabis research space.

To prevent the spread of HLVd, we recommend:

HLVd is a challenge, causing significant damage to the cannabis industry, but it can be controlled. It is of the utmost importance to be vigilant and disciplined. Greenhouses and nurseries should regularly sample their populations for HLVd testing, and maintain strong phytosanitary protocols to prevent the spread of the viroid.

The Skinny On THCv
Scroll to top